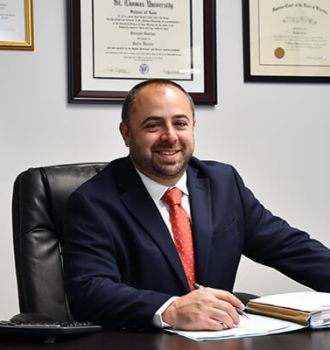 Joseph Gurian is an experienced and professional attorney with nearly 15 years of experience in the area of U.S. Immigration Law. Joseph received his Juris Doctorate from St. Thomas University School of Law and his undergraduate degree from Florida International University. He is a member, in good standing, of the Florida Bar and the U.S. District Court Southern District of Florida. Joseph has resolved thousands of complex immigration-related cases, including deportation defense, asylum hearings, marriage and citizenship interviews, family petitions, green card renewals, and work permit applications.

Joseph has received numerous distinctions during his career. He is AV-Rated, Excellent for Immigration and AV-Rated, Preeminently Qualified by his peers. Joseph received recognition from the South Florida Legal Guide as a Top Up and Comer in 2017, 2018, and 2019. Joseph considers his occupation to be his life-calling because he is able to help immigrant families, like his own, stay together, and raise future generations in a country that is free and full of opportunities.

"My goal is to help my clients get through difficult situations so they can create a better future for themselves & their family."

In the last eight years since forming the Gurian Group, Joseph has won several notable cases, which has allowed individuals and families to remain in the U.S. legally. He has also helped several young immigrants remain in the country for the next two years under the President’s new Student Deferred Action Policy. In July, Joseph was a guest speaker at a community forum presented by Students Working for Equal Rights (S.W.E.R.) and Miami-Dade College.